What are the different types of solar thermal hot water technologies? 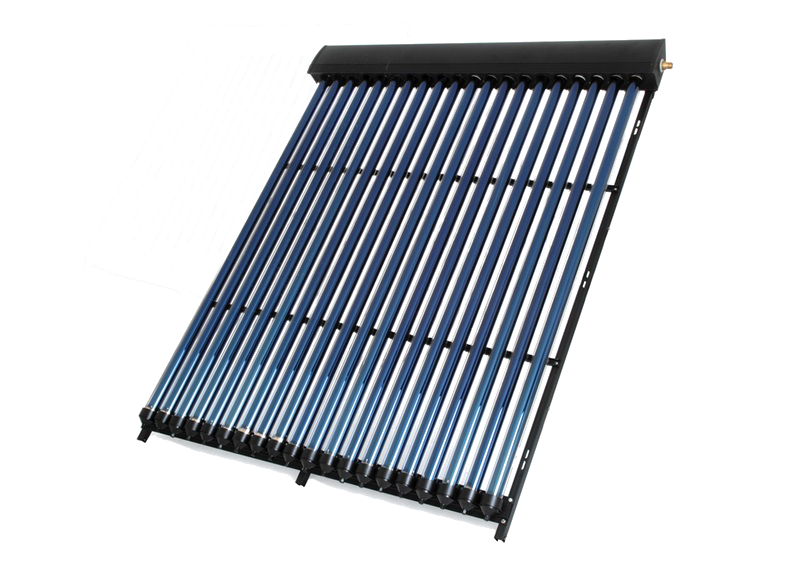 As an example, if the collector generates 3000 kilowatt hours of energy in a year then 2100 kilowatt hours would be utilised in the system for heating water. The rate of efficiency is achieved because of the way in which the evacuated tube systems are constructed, meaning they have excellent insulation and are virtually unaffected by air temperatures.

The collector itself is made up of rows of insulated glass tubes that contain copper pipes at their core. Water is heated in the collector and is then sent through the pipes to the water tank. This type of collector is the most efficient, but also the most expensive.

There are two main types of tubes that are used inside the collector which are glass-glass and glass-metal. The glass-glass version uses two layers of glass fused together at both ends. The double glass tubes have a very reliable vacuum but reduce the amount of light that reaches the absorber inside.

The cylindrical shape of evacuated tubes means that they are able to collect sunlight throughout the day and at all times in the year. Evacuated tube collectors are also easier to install as they are light, compact and can be carried onto the roof individually.

What’s more, the tubes can be replaced individually if one becomes faulty, avoiding the need to replace the whole collector. The system is an efficient and durable system with the vacuum inside the collector tubes having been proven to last for over twenty years. The reflective coating on the inside of the tube will also not degrade unless the vacuum is lost. 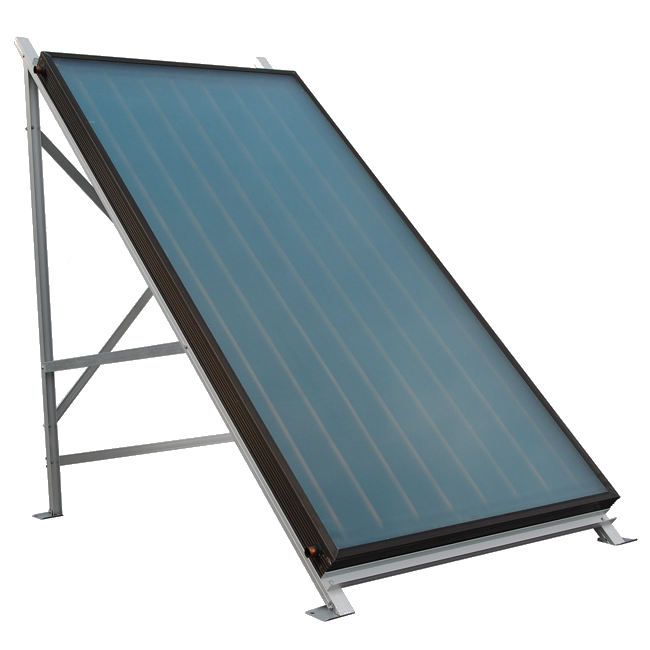 These are another common type of solar collector which have been in use since the 1950s. The main components of a flat plate panel are a dark coloured flat plate absorber with an insulated cover, a heat transferring liquid containing antifreeze to transfer heat from the absorber to the water tank, and an insulated backing. The flat plate feature of the solar panel increases the surface area for heat absorption. The heat transfer liquid is circulated through copper or silicon tubes contained within the flat surface plate.

Some panels are manufactured with a flooded absorber that involves having two sheets of metal and allowing the liquid to flow between them. Using a flooded absorber increases surface area and gives a marginal boost in efficiency. The absorber plates themselves are usually made from copper or aluminium and are painted with a selective heat coating which is much better at absorbing and retaining heat than ordinary paints.

In an area that produces an average level of solar energy, the amount of energy a flat plate solar collector generates equates to around one square foot panel generating one gallon of one day's hot water.

The flat plate panel design utilises many different absorber configurations with the main design being the harp configuration. The harp design is usually used in low pressure thermosyphon systems or pumped systems. Other configurations include the serpentine which uses a continuous S shaped absorber and is used in compact hot water only systems which do not utilise space heating. There are also the flooded absorber systems and boundary absorbers which use multiple layers of absorber sheet where the heat is then collected in the boundary layer of the sheets.

Polymer flat plate collectors are an alternative to metal plate collectors. Metal plates are more prone to freezing whereas the polymer plates themselves are freeze tolerant so can dispense with antifreeze and simply use water as a heat transferring liquid. Any antifreeze that is added to the heat transfer liquid will reduce its heat carrying capacity at a marginal rate. A benefit of polymer plates is that they can be plumbed straight into an existing water tank removing the need for a heat exchanger which increases efficiency. Some polymer panels are painted with matte black paint rather than a selective heat coating. This is done to prevent overheating although high temperature silicone is now normally used to prevent overheating.

This design of solar panel is, overall, slightly less compact and less efficient when compared with an evacuated tube system, however this is reflected in a cheaper price. This design of solar can work well in all climates across the United States and can have a life expectancy of over 25 years. 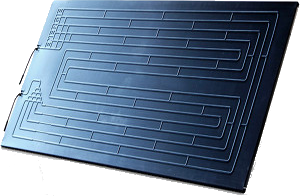 Thermodynamic solar panels are a new development in solar thermal technology. They are closely related to air source heat pumps in their design but are deployed on the roof or walls like regular solar thermal panels and do not have to be south facing. The concept behind thermodynamic solar technology is that it acts like a reverse freezer and they differ from conventional solar thermal in that they do not use solar radiation to heat up heat transferring liquids.

The panels have a refrigerant passing through them which will absorb heat. The heat that passes through the panel will then in turn become a gas. The gas is then compressed which raises its temperature and it will then be passed on to a heat exchanging coil that is located within a hot water cylinder. The heated water in the cylinder is heated to 55 degrees and can then be used around the property. The system has a built in immersion which occasionally raises the temperature to 60 degrees to eliminate the risk of legionella.

A thermodynamic system can produce up to 100% of domestic heating needs. A system that uses thermodynamic panels will in theory be able to generate energy all year round due to it not being reliant on having optimal climate conditions to reach its maximum output potential. 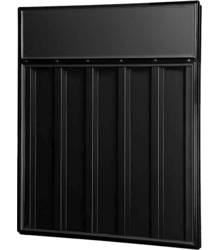 Solar air heaters are mostly used for space heating and can be both glazed and unglazed. They are among the most efficient and economical solar thermal technologies available and are mostly used in the commercial sector. The top sheet of a glazed system has a transparent top layer and an insulated surrounding frame and back panel to prevent heat loss to the surrounding air. An unglazed system uses an absorber plate which air passes over while heat is taken from the absorber. 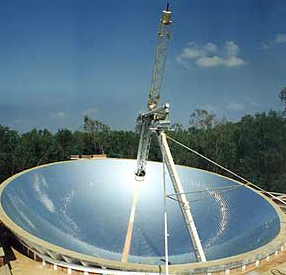 A solar thermal bowl is similar in fashion to a parabolic dish but has a fixed mirror instead of a tracking mirror which a parabolic dish would use. A tracking mirror is designed to track the sun’s movement which is very costly on a large scale. A spherical or bowl mirror gets around the problem of tracking the sun in order to focus the light in one spot. A fixed mirror is at a disadvantage with regard to energy output as it cannot track the sun in order to focus the sunlight, however a fixed bowl will save the energy output that is associated with having to move a giant mirror to track the sun.

A thermal heat store will be necessary to retain the heat generated by a solar thermal installation unit until the heat is ready to be used. Thermal heat stores also work particularly well in conjunction with solar thermal panels. The main storage option in a domestic setting would be a large insulated cylinder that contains copper coils or plate heat exchangers. The system can also include a heating element like an immersion heater. A thermal storage unit can utilise a number of different and combined technologies for hot water generation and space heating. Thermal heat stores work at their best when managing input and output for a number of different systems and allowing flexibility in how you use both your solar thermal and current heating system together.

It may be necessary to also fit a new hot water tank as your existing tank may not be suitable, but this will vary depending on a number of factors such as what kind of solar thermal system you choose to install, your existing heating components and how many people the system will be designed to accommodate.

Find out about incentives for solar thermal technology in your state.