These use high-pressure steam in a constant flow which is generated in a boiler to drive the turbine.

Electrical efficiency is maximised when the steam is condensed and pumped back to the boiler as hot water just below boiling point.

The electrical efficiency of steam turbines with CHP applied depends on the size of turbine and the pressure at which steam is extracted. Steam turbines can be deployed as the prime mover for custom-built CHP plants by recovering some of the heat at one of the following stages in the process:

Heat can then be used for process or space heating. Such turbines are particularly appropriate for CHP when steam is needed, or where the fuel available cannot be burned directly in the prime mover. They are typically suited to large-scale applications or where the amount of heat required is much greater than the amount of power. 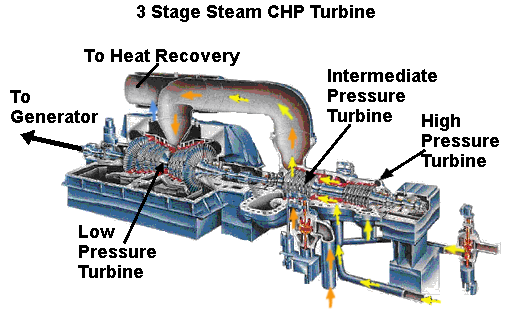